Earthquakes can also occur far from the edges of tectonic plates, along faults. Faults are cracks in the lithosphere caused by the stresses created as sections of a plate (or two plates) are moving in different directions. In this case, the earthquake event is called a slip. There are a number of different types of faults, but most can be divided into three categories: strike-slip faults, normal faults, and thrust faults.

A strike slip fault occurs in an area where two plates are sliding past each other. In relation to the ground surface the slip involves sideway movement. Strike-slip faults are found in California, the San Andreas fault being the most famous which has caused many powerful earthquakes.

A thrust fault happens when plates are being pushed together. This involves upward movement as the two plates collide and buckle upwards. This kind of event signifies a compression of the Earth's crust.

The focus of an earthquake is where pressure builds along a fault line which fails deep underneath the crust of the Earth. The point directly above the focus is termed the epicenter. 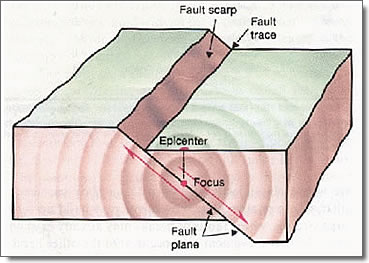