The Earth is formed of four concentric layers that have very different physical and chemical properties: inner core, outer core, mantle and crust. 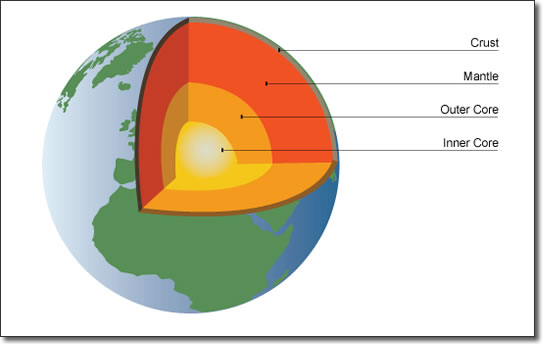 Image: The structure of the Earth

The crust and the upper mantle form a cold, strong layer known as the "lithosphere" (from the Greek for "rocky" sphere) floating on the inner mantle. The lithosphere is fragmented into a dozen of huge, irregularly shaped pieces, called tectonic plates, which are in constant motion and slide over, under and past each other on top of the partly molten inner layer. There are two kinds of plates: oceanic crust (i.e. the plates under the ocean) and continental crust. 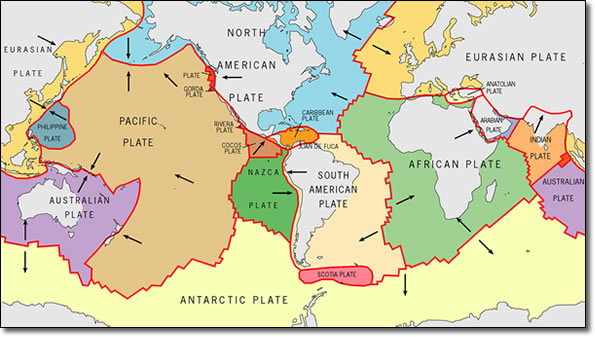 There are 7 large and many small moving plates. The plates have a depth of 50 miles and on average they move only a few inches a year relative to one another. Coastlines and plate boundaries do not always align.

Although the upper mantle is solid rock, it slowly flows in a convection current because of heat dissipating from the core. Convection currents in the mantle cause the plates to move several centimeters a year in different directions. 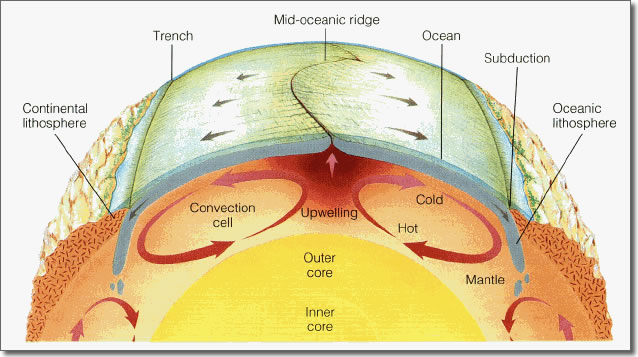 Image: The convection currents of the Earth

If you look at the convection currents, you'll see that:

Stress is exerted the plates as they move and those around them. They may collide, sink, or pull apart as the plates scrape boundaries creating stress which results in strain setting energy free. Subduction occurs when plates collide and one is drawn beneath another. This process can take thousands of years. The collision of plates creates mountains as rock layers are forced upward. As the plates diverge lava pushes through the mantle, cools and forms a new section of crust. Plates moving slowly along side each other create friction and intense heat as they slide resulting in volcanic activity if the rock melts. Earthquakes can occur if the plate slips sliding away or towards each other.

In some cases this is a gradual movement. Sometimes the plates lock together unable to release the energy accumulated which builds up in the rock.

When this energy elevates to the elastic limit of the rocks, they will break free causing the ground to shake. This usually occurs when two plates either ride over, or slide against each other, and the material at the edge of the tectonic plates deforms and ruptures at its weakest point. Thus the strain energy stored within the plate is released in the form of vibrations.

There are places on earth where two plates are separating or spreading apart, such as at oceanic ridges. Rift valleys and faults occur when the lithosphere is under tensional stress. At spreading zones, new magma comes up from the mantle, pushing two plates apart and adding new material at their edges. Spreading zones are usually found in oceans along with mid-ocean ridges. For example, the North American and Eurasian plates are spreading apart along the mid-Atlantic ridge.

As the new material flows out of the ridge, it pushes the existing ground floor out, until it eventually sinks under another plate, which leads us into a different type of boundary. Earthquakes with low Richter magnitudes along boundaries with normal fault motion tend to be shallow focus. These quakes can have focal depths of less than 20km.This indicates the brittle lithosphere must be thin along the diverging plate boundaries. 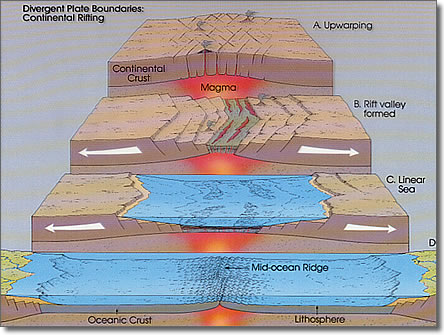 Image: Magma up swelling from deep within the Earth occurs when divergent plates spread apart

These are found where plates slide past one another. The San Andreas Fault is an example of a transform -fault plate boundary along the north western Mexican and California coast. Earthquakes along transform boundaries show strike-slip motion on the faults, they form fairly straight linear patterns and tend to be shallow focus earthquakes with depths usually less than about 100 km. Richter magnitudes could be large. 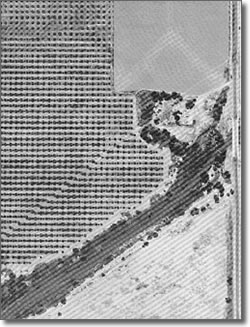 Image: The Fault of San Andreas

As seen in the image above, the trees (they look like small dots) in the aerial view of San Andreas fault have been offset by the slipping of the plates. The North American Plate to the right and the Pacific Plate to the left.

Convergent boundaries are the place where two tectonic plates converge (i.e. two plates move toward each other). These zones tend to be where compressional stresses are active and this results in thrust or reverse faults being common. Converging plate boundaries are of two types: 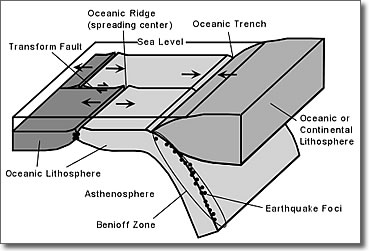 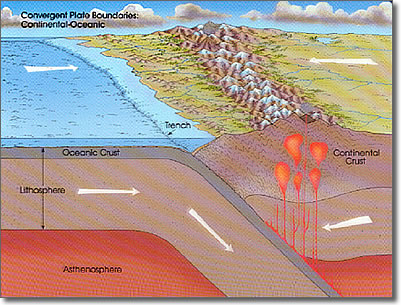 Image: Convergent plates collide into each other

In general, where an oceanic and a continental plate collide, the denser oceanic plate will be forced under (subduction) the other.