The phenomenon we call "Tsunami" (pronounced: /suːˈnɑːmi/soo-NAH-mee or /tsuːˈnɑːmi/ tsoo-NAH-mee), also called wave train, is a series of large ocean waves (or "wave train") of extremely long wavelength and period, usually generated when a gigantic body of water, such as an ocean, is suddenly displaced on a massive scale by an underwater disturbance such as an earthquake occurring on or near the sea floor or a volcanic eruption. 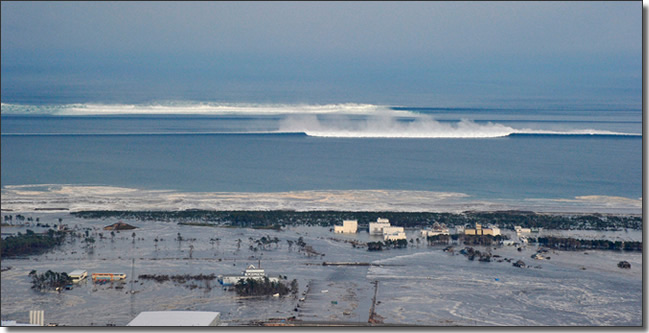 After a sudden displacement of a large water volume by seismic activity (earthquake), the ocean floor is raised or dropped and large tsunami waves can be formed by gravitational forces.

Waves travel outward from the quake zone in all directions in a ripple effect (propagation). The resulting waves can be extremely dangerous and devastating to low-lying coastal areas as they enter shallow water and hit the shoreline.

A tsunami can occur at any state of the tide and even at low tide it will inundate coastal areas if the incoming waves surge high enough. Tsunamis may occur in large lakes. About 86% of all tsunamis result from so-called sea-quakes.

Video: Propagation of the devastating Tsunami occurred in Japan on March 2011

Japanese term "tsunami" is used in both singular and plural. In English the plural form 'tsunamis' is frequently used.

The term "tsunami" originates from the devastating effect Pacific tsunamis have had on Japanese coastal communities. Tsunamis are a frequent occurrence throughout the Japanese history; more than 195 events have been recorded in Japan so far. The term "tsunami" was coined by Japanese fishermen who returned home from fishing in the evening and found the area surrounding their harbor devastated by a giant wave, although they didn't see or notice any big waves in the open water.

In the past century the term "tsunami" was largely restricted to the specialized vocabulary of the scientific community, lay people preferring the more familiar term "tidal wave".

However, in recent years, the misnomer "tidal wave" has definitely fallen out of favor because tsunamis actually have nothing to do with tides. In fact "tsunamis" should not be confused with "tidal waves". Tidal waves have physical characteristics different of tsunami waves. Strictly speaking, a tidal wave is one caused by the movement of the tide, which in turn results from the imbalanced, extraterrestrial, gravitational influences of the moon, sun, and planets, whereas a tsunami is specifically generated by a violent, impulsive undersea disturbance or activity near the coast or in the ocean, such as an earthquake, landslide (both undersea and from land into water) or even an asteroid hitting the ocean.

The once-popular term derives from the most common appearance of tsunami waves, which take on the characteristics of a violent, onrushing tide, rather than the sort of cresting waves formed by wind action on the ocean. Tsunamis and tides both produce waves of water that move inland, but in the case of a tsunami the inland movement of water is much greater and lasts for a longer period, giving the impression of an incredibly high tide. Although the meanings of "tidal" include "resembling" or "having the form or character of" the tides, and the term "tsunami" is no more accurate because tsunami are not limited to harbors, the use of the term tidal wave is discouraged by geologists and oceanographers.

Non seismic volcanic eruptions and underwater landslides are also a cause of tsunamis but misleading earlier oceanographic and geological texts refer to the cause of tsunamis to be "seismic sea waves ". The term "seismic" implies earthquake generated waves. Thus, the Japanese word "tsunami" meaning "harbor wave" is universally accepted as the correct, official and all-inclusive term.