Tsunami waves are very different from tidal waves. A tidal wave is by definition a wave caused by ocean tides, whereas a tsunami is almost always caused by an earthquake under water.

Tsunami waves are also very different from normal wind-generated waves, which many of us may have observed on a local lake or at a coastal beach. Observers of a tsunami will understand these waves are more like a fast moving tide crashing into the shoreline.

Normal ocean waves are caused by the wind, weather, tides, and currents, whereas tsunamis are powered by a geological force. Tsunami waves are surface gravity waves that are formed as the displaced water mass moves under the influence of gravity and radiate across the ocean like ripples on a pond. Regular wind waves only involve motion of the uppermost layer of the water, but tsunami waves involve movement of the entire water column from surface to seafloor.

Both common ocean waves and tsunami waves have a crest and a trough and can be described by their period (time between two successive waves), wavelength (horizontal distance between waves), speed and amplitude (wave height).

Image: The main attributes of a wave

In the open ocean, tsunamis have extremely long wavelengths (the distance from one wave crest to the next wave crest) which can be between 100 and 300 km, whereas normal ocean waves have wavelengths of only 30 or 40 meters. Because a tsunami has such a large wavelength, its energy mobilizes the entire water column down to the sea bed. 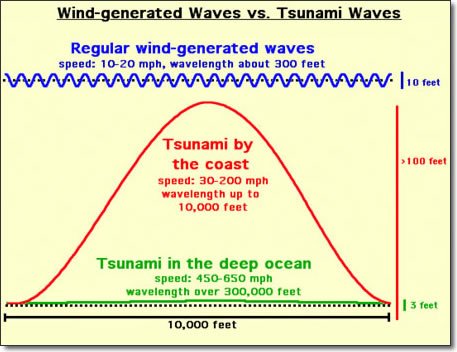 Deep water ocean surface waves cause water motion to a depth equal to half their wavelength. Ocean surface wave motion only reaches a depth of a few hundred meters or less. In contrast, tsunami waves behave like "shallow water waves" in deep ocean. Their period is also very long, mostly an hour in deep water, whereas the period of common waves ranges from 1 to 30 seconds.

While traveling in the deep ocean, tsunamis have small amplitudes (wave height) of less than 3 ft (1 m) and negligible wave steepness, which is why they are not frequently noticed by people in ships, causing nothing more than a slight swell usually about 300 mm above the normal sea surface (that is a gentle rise and fall for most vessels).

A further feature of tsunami waves is that these high-speed waves lose very little energy as they travel across the open ocean, because the rate at which a wave loses its energy is inversely related to its wave length. That is why they only propagate at high speed and with limited energy loss are capable of traveling great transoceanic distances.

Coastlines in the "shadow" of affected areas are usually safe as tsunami waves generate outward from their source.

However, tsunami waves (which are oscillating waves and, just like every oscillating wave, can undergo reflection, refraction and diffraction processes) can change their path or diffract around land masses, that is why, for instance, an island may be hit by the same tsunami from different directions. Tsunami waves may not be symmetrical as they may be stronger in one direction. This depends on the source and geography of the surrounding area.

Tsunami waves only become dangerous once they reach the shallow waters near the coast, in a wave shoaling process. In coastal areas where water levels gradually become shallower, the wave will slow down dramatically, become compressed and grow steeper due to the decreasing water depth. The process of steepening of the waves surface is like a whip action. As the wave descends the whip from handle to tip, the energy is released into a smaller and smaller mass. This energy is transferred like the cracking of a whip in a violent crescendo. 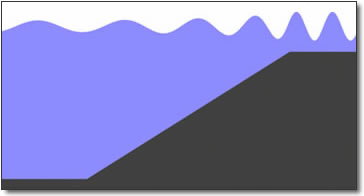 When the wave enters shallow water, it slows down and its height (amplitude) increases.

When the tsunami wave enters shallow water, its length shortens and its height rises, thus the wave is forced upward into a towering wall of water sometimes as much as 100 ft (30 m) high. This is because of the mass and energy of a tsunami wave . In wind created waves only the upper layers are moved but with a tsunami wave the complete mass of water, from the seabed to the surface is being propelled into motion. When these giant waves break, they often destroy piers, buildings, and beaches and take human life.

A wave train is a series of waves created by a single tsunami event. These waves can be of varying heights. After the initial wave, several waves will follow. In some cases, four or five smaller waves may immediately follow the first wave crashing into land like a speeding vehicle.

Tsunami waves reach the shore as a series of successive "crests" (high water levels) and "troughs" (low water levels). These successive crests and troughs can occur anywhere and the period (the time between the crests of a tsunami's waves) generally varies from 5 to about 90 minutes. They usually occur 10 to 45 minutes apart. After a powerful tsunami event multiple waves may arrive over a prolonged time period. Long after the initial event smaller tsunamis may continue over several days.